The clown evolves in a space where reality is shifted, exaggerated, stripped and taken apart, distorted to the point of absurdity, if not disguised or mocked and brutalised by imitation and caricature. But we can assume that there remains a basic sense of coherence in the clown activity. There is someone even more off-beat than the clown, the eccentric.

In mechanical engineering, the mechanism that deflects a part from the axis of rotation is eccentric. In speleology, the concretion that forms at right angles, breaking with the natural process of stalactites and stalagmites, is eccentric. Eccentrism and by extension eccentricity would therefore have to do with deviation. But even if we were to raise the bar, it would not be enough to distinguish the eccentric from the clown. The nuance may lie in the terms and what they cover. Clown comedy involves actors and therefore feelings and is based on a narrative approach. The act of the evening auguste is a short fantasy around the act that has just taken place. The entrée is a real circus piece, with a theme, a tempo, a beginning and an ending punchline. Laughter is obtained by a series of quick, unexpected, incongruous lines or gags. The passage of the clowns introduces a wind of madness in the ring, but this foolishness makes sense. 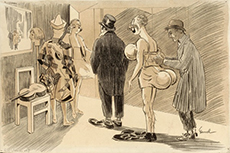 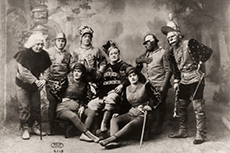 The "madness" of the eccentric is permanent and unbridled. The relationship between the partners, the use of props, costumes, musical instruments are ludicrous, misused and perverted. The public, amazed by the artists' ability to invent and shatter the limits of what could be possible, reacted with laughter to daring, virtuosic but risky displays. In the English pantomime tradition, the comic power of cruelty and destruction prevails. In Le Voyage en Suisse by the Hanlon Lees, the scenery of the chalet explodes with them. They dive into a piano to come out through its frame, walk on the walls, fly away and their characters fall apart on the stage. A type of eccentricity loaded with intentions, provocation, boldly embraces all forms of audacity with Jango Edwards (Stanley Ted Edwards), the enemy of conventions. Bert and Fred reinterpret traditional entrées like Guillaume Tell by adding a sado-masochistic dimension. 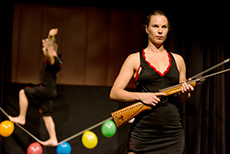 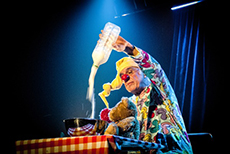 The world of "caves" brings another lesson: the discovery of new frescoes in the underground rooms of the Domus Aurea of Nero in Rome, called "grottesche". In a luxuriance of plant ornamentations, fantastic birds and small monkeys vie with fauna for the opportunity to walk like a tightrope walker on thin aerial stems. The "grotesque" style of superimposed and seemingly suspended drawings applies to demonstrations that are part of an improbable bidding war. A poster by Félix Mahier, "grotesque aérien" announces "a crossing ten feet above the table, covered with his cutlery with strong boots" or a crossing of the Vesuvius crater in the middle of an " erruption " (sic). The Bragazzi tame animated shovels (Pelles animées), their great success, while the Albano, who are cousins, almost break their necks on their scruffy ladders (échelles scabreuses), seemingly eclipsed by the Hanlon Brothers. 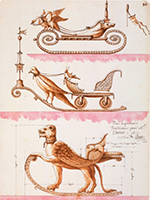 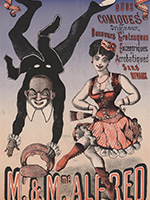 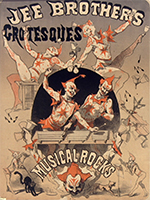 The ghost of Little Tich (Ralph Harry), with boots as long as his shadow, was reincarnated a century later in the Canadian clown Denis Lacombe who led an orchestra with ardour, his heavy ski boots literally stuck to his podium. Eisenberg Avner's despair is matched only by the gestures of another victim of the hostility of objects, the dark and mischievous George Carl, great-granddaughter of the Carletti, musical eccentrics of the Keystone. Morris and Max, the Ovaro Bros (Raymond Frau and Gabriel Mansuy) are also in the movies. The spirit of the Collins brothers (Collin Eschenburg and Matthias Fisher), previously in difficulty with a trapeze and a ladder, inspires some sequences of the Pss Pss creation by Baccala Clown…

Olivier Taquin, a living automaton, passes the torch to human robots such as the Americans Spencer Novitch or Robert Muraine. 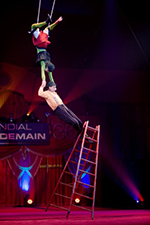 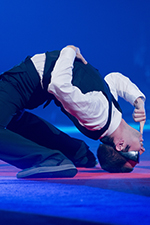 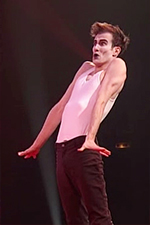 Music, like madness, is universal. Drummer Sid Plummer builds a complex piece of machinery that transforms his xylophone into a donkey over time as he plays his Serenade de l'Ane. In the tradition of Don Saunders, the pretend fool who transforms his bagpipe into a vacuum cleaner, the Nuts & Bolts old and grey musicians, perform a convincing jazz on a washboard or by blowing, in a kilt, in an old flush tank. A worthy conductor in a tuxedo, the Swiss Alfredo Smaldini turns around suddenly, with a headscarf on his head and feverishly knits a piece of wool with his batons, which he ends up slipping into his nostrils... The acrobatic skills multiply the effects of the musical eccentrics: Karle Thomson, alias Milton, founder of the Zapashny troupe, the Fratelli Sprocanis, or the Barraceta brothers with the violinist perched on stilts high above the floor. 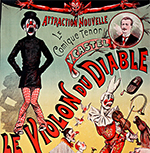 The Price brothers in the 19th century created a breathtaking duo of violins while performing a series of acrobatics that were a feat in their own right, Les violons sauteurs. The performance will be partly reworked by Brick and Brock (Marius Galante and Adrien Wettach). The latter, now known as Grock The Clown because of his eccentricities, includes them in an intuitive repertoire of entrées that, half a century later, inspired Buffo (Howard Buten) in particular. The four Bronetts brothers (Kalle, Nitini, Herman and Bruno), eccentric musicians from an old Swedish banquiste family, the Goldkette, created the Cirque Scott in 1937. The quartet dies out. The eccentric can only keep his status by remaining unclassifiable. 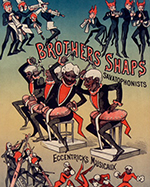 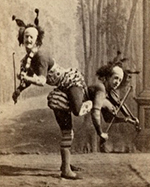 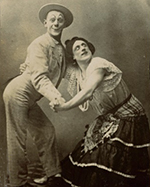