Clown in the "variety show"

Clown in the "variety show"

The notion of "variety" is ambivalent and covers a different identity from one century to the next, depending on the registers and territories where it flourishes. The diversity of the attractions that make up a programme is constitutive of the circus and music hall, but the very concepts of the German varieté or the Italian varietà obey specific rules that distinguish them from these singular artistic forms.

Conceived as spectacular mosaics, these " combinations " are essentially aimed at provoking laughter and using derision as a creative material. They merge genres, but they favour sharpness and contestation to define their respective repertoires. They are largely embodied by emblematic figures such as the Italian Totò and the German Karl Valentin, but others, in different registers, have also transgressed and criticised their eras with a comical approach. In France, Paulin, Dranem or Louis Boucot have popularised silhouettes and words as Totò and Karl Valentin have done. These two actors, born in the 19th century a little less than twenty years apart, have developed different styles, but they have in common an identical propensity to question the intricacies of the human soul in order to draw the essence of their comedy. 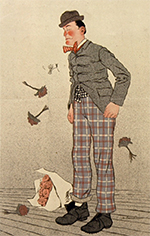 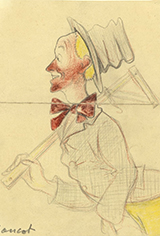 Born in Munich in 1882, Valentin Luwig Fey, now Karl Valentin, defines himself as a comedian and playwright, but he is also a prodigious actor and director, as well as a producer and author of several films. He performs in smoky bistros, improbable playing places where consumers drink, eat, smoke and chat while he delivers a series of caustic comedy sketches on a small stage. He draws his inspiration from his own daily life where he seems to be constantly fighting against the things and events that surround him and are part of him, but also against the authorities and his fellow human beings. His meeting with Elizabeth Wellano in 1911, an actress whom he promptly renamed Liesl Karlstadt, was decisive. Together with her, he will develop both a register and a body of work. Partners that everything opposes - he is slow, she is lively, he is tall and thin, she is small and plump - they build their sketches on an obvious physical contrast, but also on ideally dissimilar energies. For some of their entrées, their appearance and playing style clearly make them look like clowns. Karl Valentin wears a fake nose and make-up just like the circus clowns, dressed in a long coat that Little Walter or Albert Fratellini would most certainly appreciate. Their comedy is largely verbal, and the proximity of the audience helps to encourage them to speak more and more to provoke laughter, but they also play with the situations they create, which become as many reasons to be ironic as ever. Karl Valentin and Liesl Karlstadt play complete works, but they are also featured in programmes where their performance is a counterpoint to other attractions. 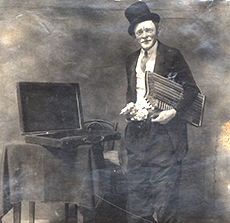 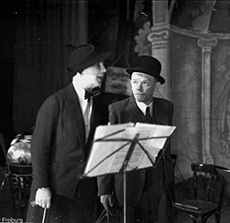 This notion of varieté on the same stage is echoed in the Italian varietà, a multifaceted form in which Totò has been particularly successful. Almost a generation apart, Antonio Clemente, an actor, was born in Naples in 1898. Very quickly, his acting skills opened the doors of theatres and he began in the 1920s in the avanspettacolo, a kind of prelude to the performance for which it is above all necessary to show ferocious energy and seduce in a few seconds the spectators who are only waiting before the beginning of the "real" show. Following this tough period in his career, Totò began to work in the halls where varietà, are performed, a very effective mix of attractions, without narration, but with a sense of rhythm and a hierarchy of performances that forces the artist to constantly surpass himself. A belated filial recognition transformed the clown into an imperial highness, but Totò chose to pursue his career, without ever denying his aristocratic ancestry. His comedy is based on both primary and very human emotions and sensations, mixing transgression, sex, hunger and misery with the most intense laughter. With a singular physique, he develops an extraordinary expressive mobility and imposes himself on stage as well as on film sets. A fan of the rivista, a form close to our revue spectacle and, intrinsically, of the varietà, he is wonderful in a popular genre where sketches, attractions and sung interludes are mixed together. Erotic innuendoes and omnipresent humour create and maintain a dynamic complicity with the audience who have fun and have no hesitation in yelling at those who perform on stage. This healthy "fusion" contributes to making the varietà a show with a contagious cheerfulness, undoubtedly less sharp than the varieté embodied by Karl Valentin and his heirs. 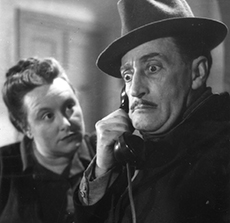 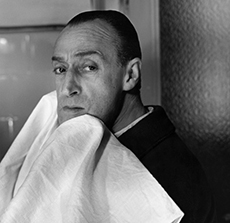