As the audience and the professionals already know, the art of clowns is mainly based on a presence, a particular state. What matters is not what they do, but how. But like any comic artist whose objective is the voluntary and controlled production of laughter among their spectators for a shared moment of pleasure, the clown practises a profession that combines technical skills and the art of composition. What are these skills?

Actors
Clowns are specialised actors and actresses who master the skills common to performing arts professionals whose physical abilities are gestural, vocal and cognitive. They allow them to improvise and interact with partners and audiences. Being a clown requires resistance and patience, and a strong work ethic to organise, as a virtuoso, confusion and chaos! Being able to perform late in life is an asset because life experience increases your sense of humour!

Homo ludens
The ability to play - in terms of entertaining activity - is essential to the clown. For laughter to exist, it is necessary to be in a playful mood that remains as childish as possible. The desire for a playful and joyful pleasure is a prerequisite for creativity and performance. They have an enemy: inhibition, which the actor ensures to chase away through an adapted preparation. 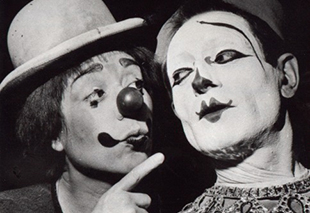 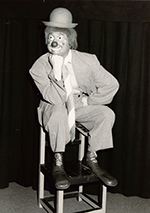 Gestures
The clown's body expression is the main element of his style and the support of his art. His gestural mastery is generally complemented by special skills in acrobatics, dance, juggling, music, and perhaps even dressage.

Spoken Words
Body language does not exclude the use of spoken words in different styles, works and cultural contexts. Mastery of several languages is common among clowns. An invented language like the " Grammelot " can be used for its comic and cross-cultural potential.

Cognitive abilities
Cognitive abilities involve the interaction of memory, physical actions, perceptions and expression. It is through them that interactions with spectators and partners, objects and space are born. Clowns are virtuoso in these areas. Thanks to them, there are countless different variations in the way the character plays and they are a sign of his uniqueness. Bringing all these skills together requires specific and long-term training.

Interaction
There is constant interaction between the spectators and the clown, who genuinely become partners throughout the performance. This is why the work to adapt the show continues well beyond the first representation, by successive adjustments, resulting from exchanges with the audience. This competence is very specific to the discipline.

Rhythm
Among the actors, clowns are like rhythm players among musicians. The rhythmic elements of their playing, as meticulously studied as for a musical performance, are characteristic of a clown's style: he or she will be very slow in his or her speech, phrasing and gestures; another ultra-fast. The rhythmic organisation of the events helps to trigger laughter. 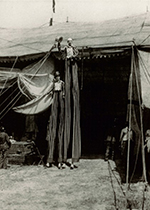 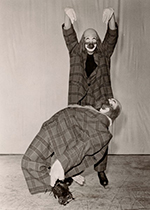 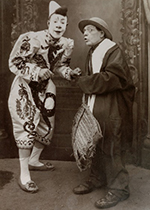 Behavioural imbalance
Like other artists, especially circus artists, clowns play with balance and voluntarily place themselves in a gestural and behavioural imbalance to reveal their strange figures. Moving away from socio-cultural references such as social norm or decorum is at the root of a clown's style of play, clownish inspiration and the emergence of laughter.

Transgressions
The art of clowns is to bring about, through their interplay and the situations they offer, anything that is outside the box, extraordinary, unexpected, peculiar, unorthodox, eccentric. This is why their works are inherently transgressive, iconoclastic and subversive.

Creation process
While a clown can take over all or part of an existing act or interpret a scenario for which he or she is not the author, a clown creation is most often original, combining the functions and skills of an author, director and performer.
The creation of the elements that will constitute the material of the show takes place through progressively structured improvisations, sometimes in public. From the moment someone starts playing, from the canvas to the composition and then to the interpretation, the writing becomes more precise.

Creating chaos
Imbalance and failure are powerful dramaturgical tools for clowns. The " flop " is a comedy driver for clowns, who mess up what we can easily do and succeed in doing what we usually fail at. In a productive inefficiency, they transgress the rules of logic and in turn create chaos. They are the geniuses of a world upside down where the twist of reality pokes at the anguish of death. 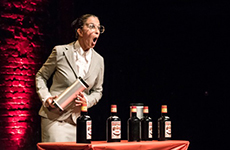 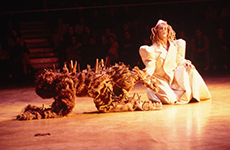 As we can see, clowns practice a more sophisticated and complex art than we usually think. They are not offended by any of this, probably because appearing like idiots is the ultimate compliment for them. The clown's profession is artisanal in its techniques and artistic in its aesthetic objectives. Clowns are artist-author-performers: in other words, they are clownographers. 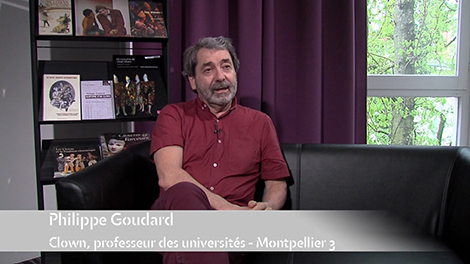