In the History of the World, in the past or in the present, stage or circus comedians, like singers and actors, carry their trunks with costumes and props to the scene of humanitarian disasters such as inter-ethnic or world conflicts.

During the 1914-18 war, the Fratellinis played behind their more or less grotesque masks, sketches where the agility of the repartees competed with the virtuosity of the antics, to entertain soldiers immobilised by suffering and mutilation and Poilus with "broken faces". Then, very quickly, for the works of war orphans. 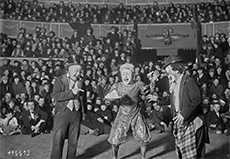 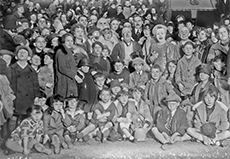 At the Théâtre des Armées, Foottit, who had particularly distinguished himself at the New Circus in the pantomime Pierrot Soldat, exercised his often-caustic verve and beat his partner in front of soldiers whose morale was shaken by the long wait between two engagements against the enemy. 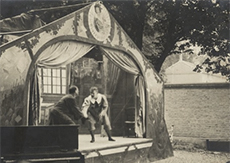 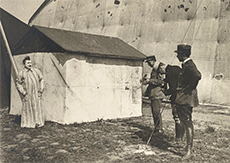 In 1994, in France, Antonin Maurel, actor, clown and musician, created Clowns Sans Frontières France the day after he met Jaume Mateu Bullich, the Catalan clown Tortell Poltrona. The artists of Clowns Sans Frontières France in turn go to meet populations affected by so-called natural disasters, local conflicts, poverty or exclusion. Created as real troupes, artists and technicians visit refugee or migrant camps, slums, orphanages, centres for disabled children, juvenile prisons or homes for street children.
The initial motivation of "humanitarian clowns" as well as "doctor clowns", but in different territories, is to give back the smile and playfulness to suffering and deprived children, and a little confidence to the adults around them. They reach audiences in very diverse regions of the world through time-targeted, situation-specific artistic actions prepared in advance with partners from humanitarian organisations. Their actions are carried out by clown characters, even in countries where the canons of the Western clown are unknown. 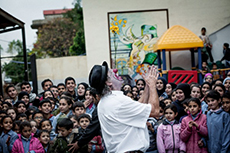 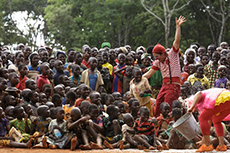 Their shows and workshops with local populations are enchanted interludes in the disenchanted daily life of these conflict victims. In these uncertain and shifting environments, the clown is able to harness all of his character's resources to wryly shake up difficult daily life and bring comfort, joy, warmth and smiles. A specialist in improvised clownish play, he uses a symbolic and poetic language that is nourished by the uncertainty specific to each context.
For more than twenty years, Clowns Sans Frontières has been active in India, Egypt, Uruguay, Tanzania, on the Burma-Thailand border, in Madagascar... and in France in areas where migrant groups are trying to survive and find an end to homelessness, like in the densely populated and now dismantled "Jungle" around Calais.

The techniques of the humanitarian clown

Since its creation, the association Clowns Sans Frontières (CSF) has brought together artists, actors, acrobats, clowns, technicians, project managers and photographers around artistic creation experiments carried out during a "campaign" in devastated territories. As a support to local actors, clowns without borders contribute to local development assistance and to a greater knowledge of vulnerable populations forgotten by the general public. They deploy an arsenal of tools and strategies specific to social intervention. 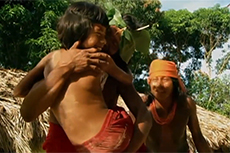 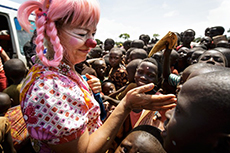 Their approach is based on questioning, listening carefully on the ground and proposing activities. CSF's visual artists research and exploit recycled materials and supports found on site, which are often sufficient to capture everyone's imagination and creativity. The shows are based on the territory and all the meetings held on site. Carried out in the field of intervention, they are unique and ephemeral.
Dedicated to constantly investing in new territories, Clowns sans Frontières France brings together nearly 450 artists after twenty-five years. Since its creation, the association has carried out more than 200 missions in more than 40 countries. CSF has recently been involved in camps in Central Europe with refugees from the Middle East.