The classical circus can be characterized by its canonical form, its dominant aesthetic and its social functions. 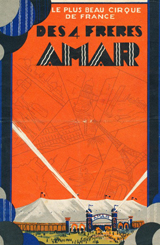 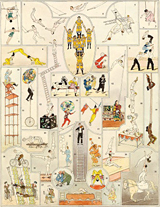 1. Two formats exist: the act, lasting on average six minutes, and the programme, composed of a dozen acts, These acts reveal various specialities, called, in this case, "fundamentals": the equestrian arts, wild animal training, floor and aerial acrobatics, juggling, clown entrances and re-entrances, etc. The acts do not follow on from each other except, exceptionally by a (theatrical or choreography) leitmotif, but are linked by an aesthetic unity and the intermediary of the presenter (the ringmaster). The performances are held preferably in a circus ring and/or under a big top (canvas or hard), but can also be performed outside in a summarily defined space, or on stage, notably in a cabaret.

2. No less a canon that this almost immutable form is its global familiar aesthetic that is instantly identifiable, expressed through the following recurrent signs: music (the importance of brass instruments, percussion and melody), colour (red and gold), plastic (the frequent conical  shape of accessories, the clown's red nose, gracious poses of the artists and their precise movements, a physical appearance following the codes of ancient Greek sculpture (standard, often close-fitting costumes), or even, olfactory (the smell of animal droppings and candy floss). This aesthetic seeks to create three main effects: wonder, through the demonstration of rare skills perceived as feats; fear and vertigo, provoked by the risks taken by the artists and even the real danger they encounter; and laughter, which aims to diffuse tension. It thereby celebrates moral values (courage and perseverance) and vehicles a general propos on the limitations of human beings and overcoming both yourself and the laws of nature.

3. Its primary social functions are to entertain and to bring together a community, starting with the family, around values that supposedly transcend social differences (age, economics, education, gender). Sometimes you can also see a celebration or rehabilitation of the nomadic lifestyle, the possibility of social integration through the practice of a difficult discipline and a harsh, fraternal lifestyle, and the defence of an economic model of free enterprise.

A strict cultural form, the classical circus has nevertheless known some significant variants: the fairground and gipsy aesthetic – a grand show with many effects, circus without animals, or on the contrary, exclusively equestrian performances. 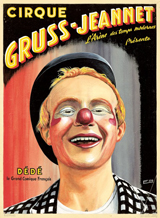 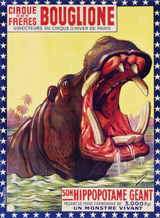 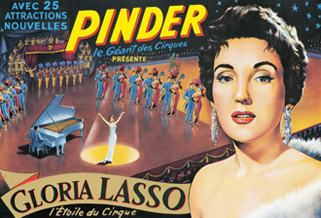