In the rich history of circus arts, the horse, the ideal partner, has a privileged place. It is at the centre of many prestigious equestrian exercises and festivals that draw their inspiration from ancient traditions and contribute to the development of the performance environment alongside the circus.
Thus, Victor Franconi, whose surname is associated with the adventure of the Olympic Circus, inaugurated the Hippodrome de la barrière de l'Étoile in August 1845. The high wooden fences close off a vast hairpin-shaped field designed to celebrate the horse ad infinitum through pantomimes, tournaments, races and other carousels. 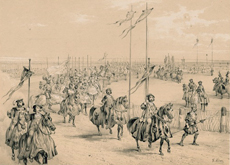 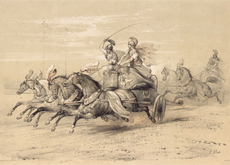 When the Circus Maximus was created in Rome, dedicated to the Sun God, solemn parades of chariots served as prologues to the ludi, games and festivities taking place in its huge hippodrome racetrack. The Pumps of the games have the splendour of the Triumphs of the emperors returning from conquests. The lead chariot is the Sun chariot, which in mythology prevails in its race around the Earth: Carrus Soli in Latin, which is later declined as Carro del Sole and then Carrousel.
After the fall of the Roman Empire, the custom of carousels persisted in Italy and in some former annexed countries, in the form of equestrian parades and jousting with codified figures. In a book published in 1669, Claude-François Menestrier evokes a Renaissance that rediscovers the tradition of carousels. Enriched by local traditions, they are adopted in several European courts as an alternative to tournaments, notably banned in France since the fatal injury of Henry II. The term carousels now covers all forms of cavalcades, quintaine races, javelins or obstacles and exercises organised in a square or in a quarry. 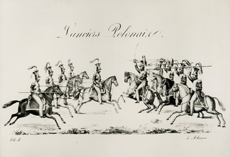 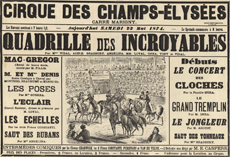 The common denominators of carousels, tournaments, jousting and other quadrilles are their highly regulated nature, their playful context despite the reality of some confrontations and the concerted harmony of the movements of the different actors. The military tone is perpetuated over time by the more or less essential presence of weapons elements and by the support of a music composed of brass instruments and drums.
Of course, the touchstone of all the events related to the carousels, without which the decorum deployed to ensure their prestige would fall flat, is the perfect alliance of the rider and his mount, the object of mutual taming and assiduous work conducted in dedicated riding arenas, under the guidance of certified instructors. 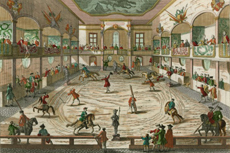 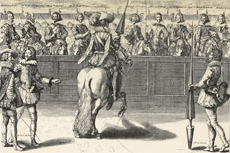 The celebration of the tournament

Dedicated to the ladies, the tournament must have style and panache. Knowledge and respect for its decorum and the whole, very codified, structure of its organisation is an obligation that the knight must observe, otherwise disgrace would be brought onto his home. Beforehand, accompanied by the complaints of the troubadours, it borrowed from them a form of language that has survived for centuries. Thus, the custom, maintained until the 19th century by participants in carousels at the Hippodrome or military riding schools, refers to "the defendants and the assailants".
As a preliminary step to the tournament ceremony, the game of rings already tests the value of the competitor. In the training phase, the simple game, which aims to unhook rings fixed on a pillar at full speed, is practiced with its variant, the game of heads, more radical since it must send the head of a mannequin flying.

From jousting to ballet

From the living room to the riding arena, the quadrille showcases the talents of the dancers, whether they work on a floor or on horseback in the sand of the tracks. Strapped in their hussar uniforms, the horsewomen of the quadrille of the Dames colonels led by Pauline Cuzent, Antoinette Lejars or Caroline Loyo or, later, by Émilie Loisset at the Cirque des Champs-Élysées, entertain the discerning public of horseback riding clubs. Dynasties of squires, the Loyal, the Carré, the Schumann, the Houcke, the Grüss, do a series of quadrilles, "manoeuvres" with several couples and carousels of 25 to 40 horses riding on the track. A poster of Barnum & Bailey's 1902 French tour announces races and manoeuvres under the title: "Heroic exploits on the Stade Hippodrome". There are a thousand and one ways for riders to share the nobility and beauty of a horse in motion.