In all cultures, the bird evokes enchantment, freedom and exoticism for its palette of sounds and colours. Wanted, hunted, it is captured for its song, its hunting ability or the adornments offered by its feathers. In Asia, its ramage makes it a perfect companion for everyone, from the Emperor of China and his legendary nightingale to the old go player, a pillar of the public garden, where he drags his serin in a bamboo cage. At the opening of the Roman circus games, some parades dedicated to the gods, called Pompes, present on bedding, groves of trees with branches loaded with hundreds of silver cages and shells full of birds. Privateers, sailors and acrobats display parrots in a thousand colours, placed on their shoulders or chained to a perch, symbols of restricted freedom. 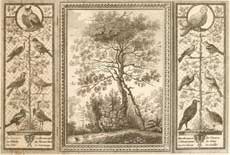 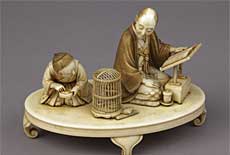 There is a lot of talk about flying and elevation in the circus imaginary world. The acrobat dreams of being as light as a bird. The banquiste soon associated the charming, agile, complicit bird with spectacular exploitation. He removes it from its natural environment with the help of a bird catcher, skilled at reproducing its trills and whistle, to tame it and make it a partner. Arriving from Italy at the age of 23 with almost no luggage, Antonio Franconi first began working in a menagerie in Lyon as an animal groomer and trainer. The trajectory of the horseman, future pioneer of the French circus, involves experiments as a "physicist", the first illusionist to apply himself in fairs and theatres, which he enriches with his work with trained canaries. He abandoned them for bullfighting in a wooden amphitheatre erected in Les Brotteaux, but in a delicate relationship with the "toreadors" who felt exploited, he left Lyon for Paris where Philip Astley hired him in 1782, accompanied by his canaries. Twenty-five years later, faithful to the birds, he will include in the programme of the Cirque Olympique "the serins who hold a council of war" alongside the Coco stag.
A 1803 poster, praising a "Dutch Bird Race", details with powerful illustrations, the presentation by Professor G. Dujon, of the wonderful tricks carried out by his little artists, from the Perilous Somersault or Balance on the wings or on the head to the small roles performed using miniaturised accessories such as Le Canonnier, Le Déserteur ou encore Le Brouetteur (‘The Gunner, The Deserter or the Wheelbarrow Carrier’). Canaries, serins, titmice, even sparrows, are attracted by the bird catcher or the bird charmer, embodied in other scenes by the character of Papageno, a whimsical fowler created by Mozart for his Flûte Enchantée (‘The Magic Flute’).

see the libretto of the opera performed for the first time in Paris, at the Théâtre-Lyrique, in 1865 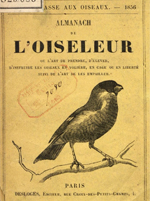 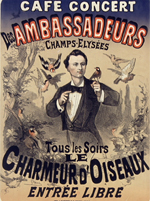 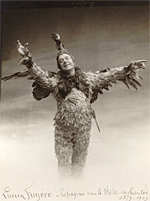 Graceful, thin and white, easy to hide in pockets and sleeves, the dove is an ideal partner for the magician. Heir to the conjuror of squares and markets, the illusionist manipulates cups, playing cards, multicoloured scarves and all the everyday objects he makes appear and disappear. From the collection of living room accessories placed on a miniature pedestal table, flower vase, top hat or precious box, a rabbit or a bird suddenly appear as an astonishing burst of life in a sophisticated universe.
As a survivor of ancient venationes, the reference to hunting, crossbow hunting, hunting with a rifle, or hunting with hounds, is a reference in circuses and racecourses to targets made up of trained animals such as the Franconi stag or pigeons, closer to the city's inhabitants. 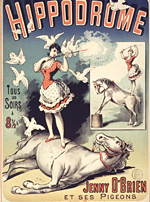 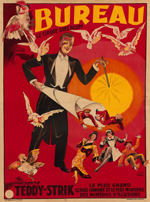 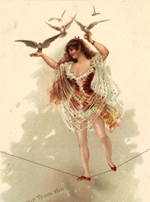 Aerial ornaments, more mobile than flowers, more visible than butterflies, doves and pigeons can also top off a balance routine or form a counterpoint to exotic animal training acts. These birds work both alone to create an illusion effect or in small companies to offer surprising and emotional flights. They are dressed like small dogs but equipped with wings that allow them to rise instead of jumping. They perch on thin apparatus, beams, trapeze or balancing rods, turn inside hoops where they line up in groups or twirl through the tent before landing on their master's head and shoulders.

At the 1937 Universal Exhibition, Dar-Bern presented two budgies that swung at each end of a board on small perches, while their companions steered a miniature carriage forward, one in the stretchers and the other on the coachman's seat. Subjects of infinite admiration for their flamboyant ramage, macaws and parrots arouse desires among explorers of new territories who want to own them. According to Alfred Brehm, 19th century naturalists are accustomed to comparing these birds, whether they come from the jungles of India, the Andes or even Africa, to "winged monkeys" for their climbing skills and the same malicious, capricious and inconsistent temperament. More admirable in flight than on the ground, these birds, with their silhouettes weighed down by powerful claws and beaks, have a somewhat swaying gait, but they possess rare resources that resemble the most advanced mammals: they have the five senses, and some have "speech" and a prodigious memory... From the impressive-sized ara macaw to the lorikeet, via the cockatoos, the parrot family and related species shine in the entertainment world. 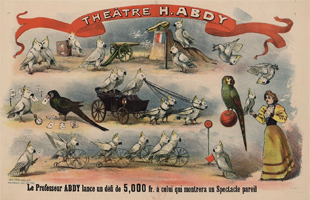 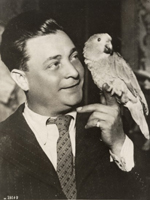 In the Pantheon of skilful parrots, it is the Gabonese grey parrot, known as Jaco from the beginning, which gathers all the votes of educators who wish to converse with their winged companion. Its memory, the morphology of its larynx, linked to its ability to identify the right recipes to obtain treats or petting, not only make it easier for it to learn words, names and small expressions, but also dictate the right answer in return. If more powerful cousins, macaws or cockatoos, are preferred for the beauty of their plumage or strength, they cannot always arrange their "voice" to say words.
In the tradition of the Russian circus and its dynasties of trainers, animals are solicited in various forms, developed, to flesh out programmes that would collapse without their participation. Thus, in 1967, showing at the Cirque de Moscou in Paris, Valentin Filatov and his wife Liudmila presented in various entrances, bears, dogs, a rabbit musician and the performances of several macaws on hoops that climb to the dome of the Palais des Sports. The same Revue includes a trapeze act performed by Elena Avanessova, an aerial acrobat, and a golden eagle, Ouragan or Olric on an alternating basis. 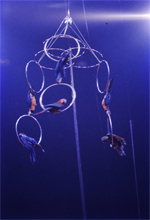 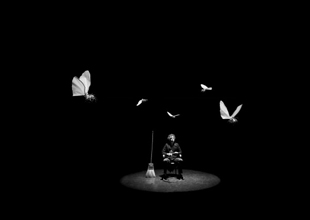 The bonhomie of the Englishman Norman Barrett, the emblematic Mr. Loyal and lord of the pastel-coloured budgies named Harry, Aaron or Jean-Claude, as well as the inventiveness of the French magician Alpha, master of the macaws, enabled the activity to reach the 3rd millennium mark. Nevertheless, times and views are changing. More than the captivity of birds present in many homes, it is perhaps the absurdity and gratuitousness of the work they are asked to do on tiny bicycles or along complicated gantries of trapezes, ladders and seesaws that discourages a new audience from seeking these types of attractions.
It is also undoubtedly thanks to the emerging capacity of contemporary creators to imagine reincarnations of birds almost more real than the originals, that we can now leave these creatures in their natural universe. Surrounded by a crown of feathers, balanced and supple on an inspiring organic support, Andreï Moraru reveals the theme of his metamorphosis, half acrobat, half black flamingo. Etienne Saglio is an illusionist who uses the technique, vocabulary and principles of "new magic". When released, his "doves", winged metal balls, seem to move freely. They land where he sometimes wishes, he picks them up in flight with a large landing net. These birds have a life that their master breathes into them but does not steal from them. 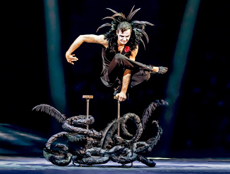 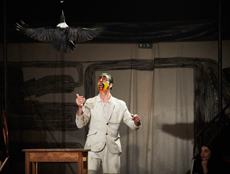