In his book L’Acrobatie et les acrobates, published in 1900, Georges Strehly called "pure juggling" this branch of juggling, which was still not very popular at the time, and which is now commonly referred to as "aerial juggling". It consists of continuously throwing and catching at least three identical objects on a periodic basis. This is called symmetrical juggling, as opposed to asymmetrical juggling (with disparate objects). The speed of throws of several objects of the same nature - Strehly speaks of "velocimanie" or juggling velocity - can give the hypnotic illusion of a continuous line, which is particularly obvious when the objects are bright or inflamed. The number of jugglers can vary: we speak of passing to designate the exchange of objects, of picking when a juggler "steals" in the middle of their run the objects thrown by his partner. The number of objects is only limited by the juggler's physical abilities and the history of juggling in the 20th century is marked by records: eight balls, eleven rings... The list of objects already juggled is immense: dolls, sickles, hats... Dominique Denis inventories more than a hundred of them in his book L'art de la jonglerie, and it has been further enriched with the addition of objects-materials: clay or eggs... 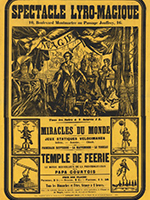 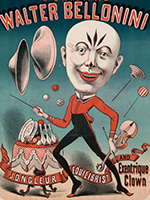 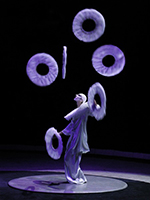 In juggling, the figure of throwing an odd number of objects from one hand to the other, crossing trajectories, is called the cascade. And the one that results from throwing an even number of objects without them crossing each other is called the fountain. Thus, in a six-ball fountain, three balls are thrown asynchronously by each hand, those thrown by the left hand never reaching the right hand and vice versa. If you want to juggle a cascade or any other crossed pattern with an even number of objects, one hand must throw higher than the other, unless you introduce a pause in the pattern. Other figures have almost standard names: the box, the mill's mess, but all the figures and patterns can now be noted in siteswap, by a series of numbers. The invention of siteswap, the progress of computer graphics and then Internet dissemination have made it possible to design tutorials and programs for the creation of juggling tricks, with a virtually infinite number of immaterial objects of all kinds and for an equally infinite number of "hands". 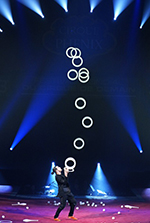 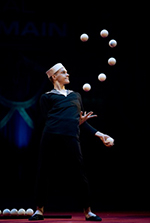 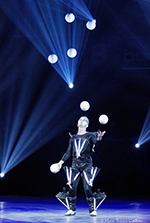 Aerial juggling and its most common forms, with balls, clubs, flaming torches or rings, became established in the 1970s as the very stereotype of juggling. However, if its origin is lost in the mists of time, it has only recently gained this emblematic status.
It was really from the time of Enrico Rastelli, around 1925, that juggling focused on throwing objects of the same type. We can consider that the balls, discs and sticks used by Rastelli are the precursors of the juggler's three standard accessories: ball, ring and club. In addition to Rastelli's reputation, two other elements contributed to the advent of juggling as a leisure activity in the United States in the 1950s and in Europe in the 1970s: the sharing of good practices between jugglers and the mass production of plastic objects. Manufacturers of plastic objects appeared at the end of the 1970s, which led to the gradual development of amateur juggling between 1950 and 1980.

Jugglers of the Asian period in the mid-19th century used hollow metal balls, but Cinquevalli used wooden or ivory billiard balls instead. In the early 1900s, rubber balls became the norm. In an interview, Cinquevalli says he has a plate of rubber balls in every room of his house, so he never misses an opportunity to practice. Rastelli uses wooden balls covered in string for his ball count records, and for his balance and throwing numbers, flaming rubber balls. In 1930, for the creation of his football-inspired act, he replaced rubber balls with leather balls, which earned him the sponsorship of the German supplier Berg. Until the 1980s, most juggling equipment manufacturers sold stage balls, some with a soft structure, others with a harder structure. Filled balls are known as DX Balls. In the 1970s in Ukraine, juggler Mikhail Rudenko invented a new type of ball for the stage, half filled with sand. They became popular in Western Europe under the name of Russian balls.
The seed bags date back to the appearance of juggling. Archaeological excavations in Egypt uncover seed bags made of leather pieces sewn together and filled with fibres and stems. But today's grain balls have nothing to do with their ancestors. In 1991 Michael "Fergie" Ferguson made regular size and weight balls from six pieces of leather that were an immediate success. 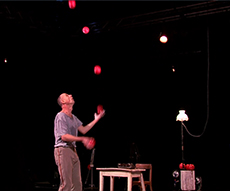 Juggling clubs are the result of two parallel evolutions that end up crossing each other. The first is the development of "Indian" clubs in the United States, the second is the introduction of Japanese clubs into the juggling scene in Europe.
It is in a club training manual, Indian Club Swinging, one two and three club juggling, written by Franck E. Miller and published in 1900, that a three-club cascade is first described, but traces of the use of clubs by Dewitt and Rawson can be found in the 1880s. In 1887, Edward Van Wyck, originally from Ohio in the United States, became the first manufacturer of hollow juggling clubs. He made a club out of three pieces of wood, sold his equipment to Harry Lind, from Jamestown to New York, who made it evolve even further. 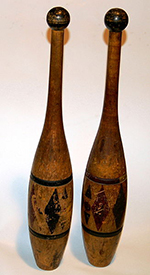 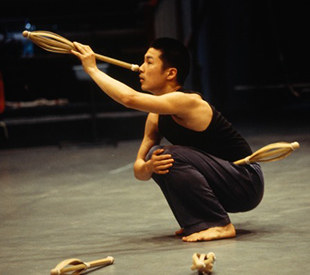 The invention of passing by the Devine brothers, around 1885, was crucial for the development of clubs. They explain: "We didn't know if it was possible to exchange six clubs and thought that the best way for the spectators to see the throws would be to stand side by side and face the audience." They then imagine the exchange of clubs back to back, and then end up juggling in front of each other. The first to juggle with four clubs is someone called Charles Hoey. The first to juggle five clubs is Ben Mowatt jr, whose father Ben Mowatt Sr had invented the three-, four-, five- and six-person passing pattern. The first to juggle six clubs is Pat McBann with four clubs in one hand and two in the other, but he never adapts this number for the stage. The first to juggle seven clubs was John Breen, who also performed a five-club fountain with a sixth club balanced on his forehead in the 1910s.
Meanwhile, in Europe, jugglers are developing the Japanese baton technique. In 1876, the first Japanese troupe arrived in Europe. Their style and performances would have a great influence on European artists, including many of them who were beginning to reproduce the Japanese repertoire and costumes. Japanese baton juggling is inspired by a very old tradition, Daikagura, which consists in skilfully handling taiko drum sticks - taiko meaning drum in Japanese. The various taiko drums, of Chinese origin, introduced into Japan in the Yayoi period (between 500 and 300 BCE) were used in war but also in court music called Gagaku, played in castles and shrines throughout Japan. During the 19th century, a Japanese artist thought about the idea of using taiko drum sticks to juggle, in combination with a very tight ball of yarn. 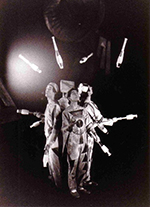 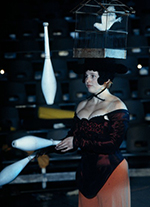 At the beginning of the 20th century, Enrico Rastelli saw in Russia the Japanese juggler Takashima who handled such batons and took inspiration from them. But while the Japanese use them mainly for certain balance tricks, Rastelli throws them and catches them at very high speed. He crosses trajectories, throws under the legs, in lunges, and four, five and six sticks are thrown in various ways, all combined with balance and bounces on the head. Rastelli is widely imitated. His style even became the norm in Europe in the 1920s and 1930s. Several jugglers of this school are well known: Piletto, Serge Flash1, Trixie2, Bob Ripa3, Angelo Picinelli and Paolo Bedini4.
Indian clubs and Japanese batons will soon merge. In the 1885s, the American Murdock brothers were probably the first to be hired in Europe. When European jugglers discover the passing numbers, they compare the club to the stick they commonly use, and begin to modify their sticks in several ways, adding a small metal cage at one end of the stick, such as Francis Brunn, or enlarging the stick with cork or balsa to imitate the club. A new version was finally created, in which the stick went through the entire length of the club. Previously, the handle would stop where the body of the club began. Gradually, the stick and club became one object.
In 1959, a New York juggler named Dave Madden purchased plastic bowling pins, cut the top off and inserted a stick into them. He then attaches the end of a crutch as a knob to it. This is the only clear, proven link between bowling pins and juggling clubs that we can see. One of the jugglers Dave Madden offers his homemade clubs to is Jay Greenberg from Brooklyn, who improves them with the addition of cushioning, a spiral wound handle and foam handles. He also modifies the shape of the club by adding a plastic cone to the bottom of the body. The design of Jay Green's juggling clubs is copied by all manufacturers, starting with Dubé in 1976 and then Todd Smith in 1981. And others ! 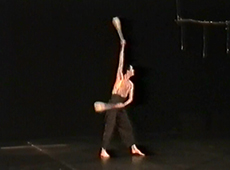 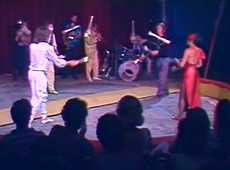 History of the rings

The modern juggling ring is a very specific object. It is thin, flat and has an edge, which allows you to hold three, four, five or even more objects in your hand. The juggling ring, in the form that is familiar to us today, was first used by Angelo Picinelli around 1930, but it seems that ring juggling has existed for a very long time. In the Symposium by Xenophon we find the mention, in 422 BCE, of a woman juggling with twelve rings while dancing. In 1528, the Emperor of Hindustan described jugglers with wooden rings. Asian jugglers who first performed in Europe around 1820 use metal rings, which they rotate around their fingers and toes.

Towards 1890, Paul Cinquevalli inserted plates into several of his tricks. Around 1920, Enrico Rastelli juggles with six or eight plates. Taken up by his imitators, the plates were soon modified to be easier to catch and some looked more like discs with thick edges. Sometimes we use papier mâché instead of wood. However, the exact transition from the plate to the ring remains difficult to identify. In the 1940s, most jugglers started to use rings, probably because the object was easier to handle than plates. The rings were made of wood until the 1970s, when Dave Finnegan began mass production of plastic rings for schools.
Before 1970, the only way to juggle with rings was to throw them and catch them. There are no variations, except in the synchronous model which uses an even number of objects. Serguei Ignatov changed the game by introducing new throwing modes such as pancake flips or flat front throws. His technique may seem rudimentary by current standards, but at the time it was sensational and laid the foundations for ring juggling that would remain in use today. 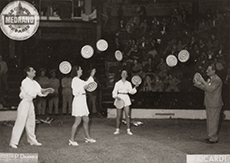 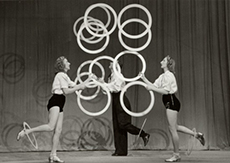 In the 2000s, juggling techniques began to be broadcast on VHS tapes and then on DVD. Since the advent of social networks, juggling has been widely documented on the Internet, which also allows siteswap to be widely distributed. This first accurate juggling notation system dates back to 1981. It was developed by Paul Klimek, in California, who named it Quantum juggling. The principle is, for each object throw, to note the time measurement, in terms of beats, before it is restarted. 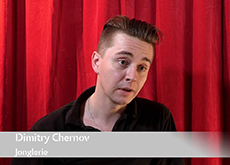 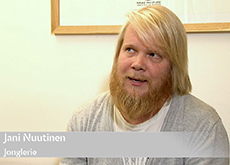